All Pictures Courtesy Saurabh Sawant
In the midst of our burgeoning, cosmopolitan, chameleon like city like lies another city, an island within an island, Sanjay Gandhi National Park is one of a kind national park, unique in the fact that it is surrounded on all sides by an extremely populated city like Mumbai, which threatens any day to break its boundaries and spill over into this one last bastion for the voiceless.
Today we saw the indifference in the heart of man for this park whose worth is beyond money and beauty beyond words. Saurabh Sawant  and I visited the Nagla Block on 15th, for an early morning trail. Reaching by 8:00 a.m. we began birding in the pale gold of early morning sunshine.  At the very start Nagla is quite dry, teak & dalbergia trees dominate the scene, teak's dry leathery leaves cover the forest floor in a carpet of brown and yellow. As you start walking in the flora changes, green peeks out from amongst the browns and the yellows. Also to add colour to the drab one can see a splattering of red in the form of “Kusum” trees. In their newfound glory these trees are a sight for sore eyes. Their bright red leaves against the blue sky will make any artist run for his money or his brushes.
The trail was alive with bird calls and just upon entering we had wonderful views of Common Iora, Chestnut-shouldered Petronia, Sunbirds etc. A few meters of walking inside we heard the most melodious of calls of a White-rumped Shama. A pair of these beautiful birds regaled us with their nimble flying and their fresh plumage. The male kept showing off his rufescent belly and his snow white rump with just a few downy feathers peeking out from under his tail. A Banded Bay Cuckoo calling from deep within signalled the onset of summer. 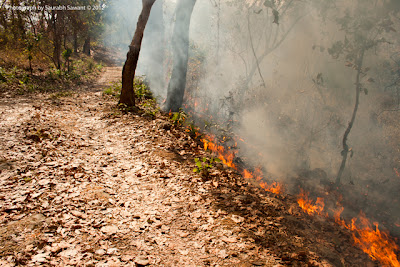 Fire along the trail (Pic courtesy Saurabh Sawant)
Having enjoyed the Shama to our hearts content we walked further inside when we heard a snap of dry twigs being burnt on the right side of the trail. We thought it was perhaps a fire line, a controlled fire lit by the forest department to control the spread of a wildfire or forest fire. But there were no forest officials in sight and it dawned on us that this was a forest fire, spreading fast consuming the forest floor. Smoke and ash, the scene was disturbing and we felt utterly helpless with its magnitude. Finally we gathered our wits and first and foremost called up the forest department control room and notified them about the fire. We decided that it was up to us to do something to arrest the spreading fire. Gathering a couple of twigs we started to beat the fire and also removed dried leaves from the fires path so it would have less fuel to burn. Creating a fire line, working our way upwards for more than an hour, we managed to stop the fire from spreading further to the west. At the top of the steep slope we realised that the fire had already spread down the slope on the south side, the smoke billowing upwards showed us the extent of the fire. 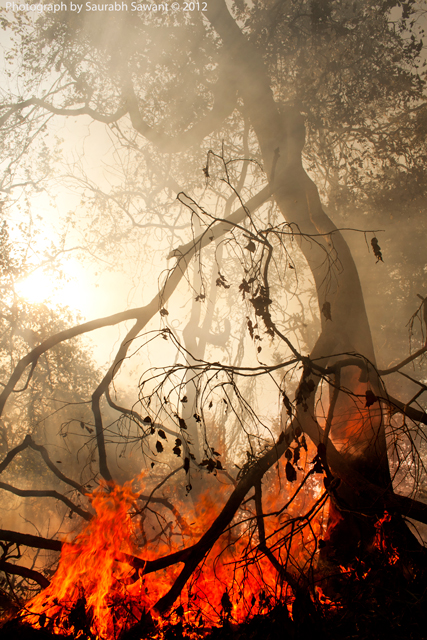 We could only watch as the fire kept spreading further down on the south side, showing us that the elements of nature are beyond our control. Perhaps the fire had been raging since the earlier night; around half a kilometre patch of the forest in the east side was completely burnt, the blackened forest floor smoking with hidden embers. Maybe it was a carelessly flicked stub of cigarette or the embers of a bonfire or perhaps just nature’s way of regeneration, we may never know but to watch the fire eat up the forest floor was troubling. The  few people we saw collecting firewood walked by nonchalantly, this being a scene they might see every year and so it makes no impression on them for they know that the forest will regenerate, life goes on. By the time the season changes all traces of today will be washed off and life will endure, as it should. But will we? 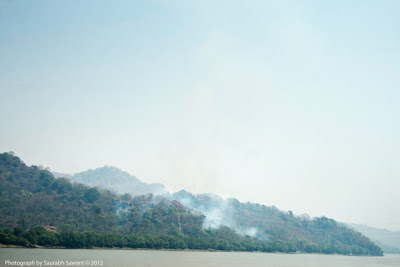 View from Vasai bridge (Pic courtesy Saurabh Sawant)
Note: We notified the forest department around 8:30 a.m. about the fire but by 11:30 a.m. when we moved out the park the forest department officials had still not managed to reach the scene. Probably when we left they approached it from the south at the base of the hill. If you ever come across a forest fire or any illegal activity taking place in the park please help the forest department respond on time by calling the Borivali control room on 02228866449

awesomely written :)
sad part even after being notified forest department didn't take it seriously....
but you guys tried... good

Thanks for your comment Aristarkhos, it was indeed sad seeing the forest go to ashes and no FD officials in sight. No doubt it could have been dangerous, but we being the only people there it was our duty morally to do whatever we could.

Wow. It could be started by the tribal people? Any idea about what happened afterwards? It will be worth visiting again to see the impact.

We are hoping the fire was just a mistake and not lit purposely, but really cant say. Yes it will be very interesting to see its impact, especially as the summer gets hotter, wonder how ground dwelling reptiles etc which take cover in the fallen leaves will cope.

Nicely written
but th occurence was a sad incident indeed.
Most of these forest fires are begun by the locals to claim the burnt land then. recently there have been about 6-8 forest fires being reported in and around SGNP.

Thanks for your comment Nikit. That's a very disturbing thing to know about 5-6 fires in SGNP, the FD just doesn't have that much manpower to deal with a major fire. Their only hope will be to prevent such things from happening in the first place and spreading awareness amongst the tribal's.